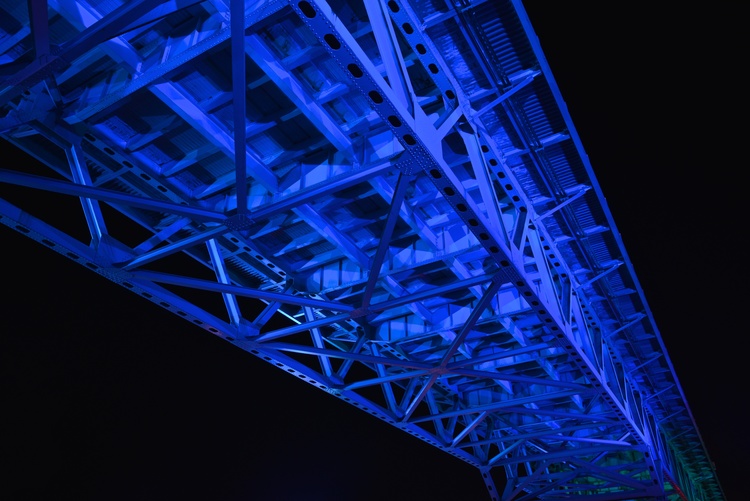 One of our first Horatio installations was on the Homestead Grays Bridge in Pittsburgh, PA. As part of creating a new lighting installation for the bridge, Clear Story Creative incorporated a Horatio in the system, with a few customizations specific to this project. The Horatio not only monitored all parts of the system, both electronically (through RDM) and visually (through a webcam); it also provided for preset recall through an easy web interface. A couple of years later, as technology and the wireless spectrum changed, Clear Story refreshed the control system to incorporate Miranda DMX.

The Homestead Grays Bridge soars 100′ over the Monongahela River, at the south end of Pittsburgh. When built in 1936, it connected Pittsburgh to the Homestead Steel Works, one of the largest steel mills in the Mon Valley.

The Homestead Works is now gone, replaced by The Waterfront, a large shopping center that incorporates the architecture of the bridge into its layout. The Waterfront hired Clear Story to light the bridge from within the shopping center, highlighting and showing off the structure of the bridge. The resulting installation consists of dozens of fixtures on the roofs of four separate buildings, as well as four locations with in-grade fixtures.

The original installation used a wireless DMX product to stream data from one building to the other 7 sites. While this worked when it was originally installed, an increase in wireless deployments in the shopping center, coupled with interference from an industrial microwave when a tenant changed over, led to the system becoming increasingly unreliable. The solution was Miranda’s “Islands of DMX” concept: Rather than requiring real-time streaming of DMX at 44 frames per second, the only network traffic is our low-bandwidth sync protocol and telemetry from the Mirandas back to their cloud server, neither of which is incredibly critical over short periods of time.

With that criteria, a 5GHz mesh network provides the backbone and a connection to the internet. 8 Mirandas can run autonomously or handle preset recall from the custom branded web portal. The nature of the mesh network is that it’s unreliable – links will go down periodically for a few minutes as interference overwhelms the connection. However, the Mirandas are each running their bit of the cue independently, and as long as they resynchronize every few hours, the cues remain seamless.

The Horatio triggers the webcam once an hour, taking a low resolution thumbnail that allows you to see the current state of the bridge lighting. This thumbnail is included in the status summary in Clear Story’s Horatio dashboard, so whenever they look at the website, they can see a reasonably current view of the bridge. It also gives them a historic record of the bridge lighting, so they can look back and see whether the lights were on on a given night. It is possible to request an image through the website as well; this gets passed through to the webcam and a few seconds later refreshes the page with a new image.

Clear Story also wanted to give their clients an easy way to control the bridge lighting, even at a moment’s notice. To this end, we actually created a minisite for Clear Story, hosted on their own domain, with their own branding. We then provided a sign-on for their client, who sees only the camera and preset controls.

This minisite is accessible through any web interface, which means the client can log in and change the bridge lighting from anywhere – including their phone. Usually the lighting is on a set schedule, but this ability to change it easily at a moment’s notice was put to the test just months after the installation was complete: when Prince passed away in April 2016, the Homestead Grays Bridge lit up purple in tribute; a few months later, it was bathed in blue to honor the fallen police officers in Dallas.