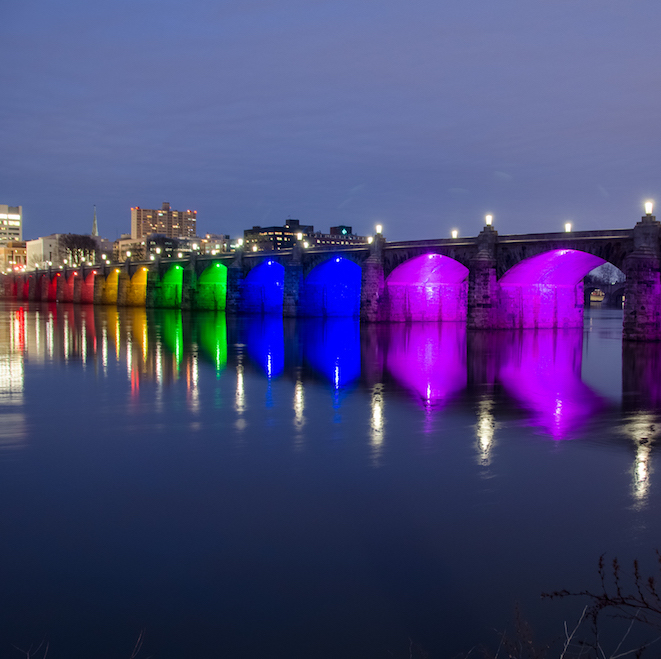 In 2017, the City of Harrisburg embarked on a project to retrofit the Market Street and Walnut Street bridges, a pair of bridges that span the Susquehanna River just two blocks apart in downtown Harrisburg. The city was looking for new lighting with dynamic effects in addition to single color looks, and they wanted to avoid having to close down traffic lanes to reprogram controllers or change presets.

The Efficiency Network designed a system that used our Miranda DMX to control Lumenpulse’s Lumenbeam fixtures via LumenLink. This enabled them to create a cohesive system that could run dynamic cues, despite some of the obstacles the existing system presented.

The Market Street bridge was a fairly simple system, with all power terminating in a single box at one end, but the Walnut Street bridge was dual-fed: power fed from both ends and split somewhere in the middle. As an additional complication, there was no internet connection available at any of the three control sites.

Because of the existing power setup, the system essentially required three control domains, two of which were on the same bridge. Since the two bridges are so close together, it was necessary for those domains to be able to run dynamic cues in sync, without being able to talk to each other. This is, of course, exactly what Miranda DMX was built for.

Combining the Lumenpulse fixtures with Miranda controllers was an excellent use of the technology, as it wouldn’t require any rewiring of the bridges, only some new gear on the ends of the bridges. The three control locations each consist of a Miranda DMX, a cell modem, and a Lumenpulse LumenLink. The Mirandas run their cues in sync, so – within the LumenTalk limitations – anything is possible, as if the two bridges were a single DMX universe.

Programming large structures like this frequently involves temporary point-to-point wireless links or very long ethernet cables run to the programming site. Because of the cloud-connected nature of Miranda, the programmer was able to do all of the programming from his car, sitting in the parking lot between the bridges, using only a wireless hotspot.

Additionally, the cloud connectivity allows programming changes requested by the City of Harrisburg to be implemented from Pittsburgh, without the usual 3 hour drive.