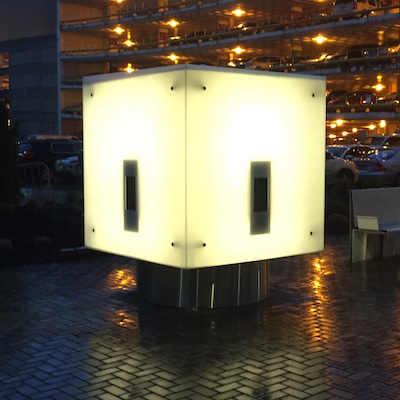 The Water Cube is a permanent art installation in a small parklet at the corner of 8th Street and Penn Avenue in downtown Pittsburgh. The installation consists of a large glass cube with backlit LED walls, two drinking fountains, and two bottle fillers – one for still water and another for sparkling water. The Cube is plumbed into the city water supply, which passes through a filtration system, a chiller, and (in some cases) a carbonator on its way to the fountains and bottle fillers.

Since the commercial chiller/carbonator system is completely unattended, the Pittsburgh Cultural Trust wanted a way to remotely monitor the system to make sure it was still operating properly. They were also hoping to monitor usage of the fountains and bottle fillers; as a public art project, measuring engagement is an important metric.

The Cultural Trust and Flyspace Productions brought us in to design and install a customized Horatio to monitor both the water and lighting systems, and we ended up designing a custom lighting controller and assisting with the programming as well.

We put together a custom Horatio installation that integrates more than 30 sensors within the Cube’s water and lighting systems. It provides real-time data on the status of both systems, sending regular status and usage reports when things are working, as well as immediate alerts when they fail.

Within the chiller/carbonator unit, we have current sensors on the main power, as well as on each of the motors and valves within the carbonator. We’ve also added an immersion thermometer in the ice bath, so we can track the temperature of the water being dispensed. There is a main flow meter on the water input to track total volume of water, flow sensors on each of the outputs so we can track usage, and high and low side gas pressure sensors on the CO2 tank.

Virtually every aspect of the water system is being monitored, so if something goes wrong, the Cultural Trust will receive an email alert from Horatio as soon as the problem arises. They can also track how full the CO2 tank is so they know when to replace it, and they can easily see how much water is being used at specific times (such as during a big festival), so they can project the installation’s future water usage and costs.

We were initially contracted to simply monitor the lighting system as part of the Horatio integration; there are 6 power supplies and a DMX control system, and the Cultural Trust wanted to know if any of them stopped working. We included sensors to monitor input current, output current and output voltage, which will allow us to track current status as well as power supply health over time.

The original controller running with Erwin Redl’s design was an architectural lighting control module that, while working well, was only rated for a 0°C to 50°C temperature range. The environment inside the Water Cube has excursions up to about 65°C and spends much of the winter below 0°C. Because of these temperature extremes, we found that the lighting controller would stop working relatively frequently.

In 2018, we replaced the existing controller with a Miranda DMX. Miranda is designed for operation from -10°C to +70°C. It is frequently installed in unconditioned cabinets, of which the all-glass Water Cube is a particularly harsh one.

An unexpected benefit is that we’d been seeing some flickering in the fade patterns on the cube. Erwin’s programming masked much of this, but if you knew what to look for it was visible. I suspect that the previous lighting controller’s 16-bit math was a little steppy, but Miranda’s interpolation engine appears to better smooth the 16-bit values as they fade.