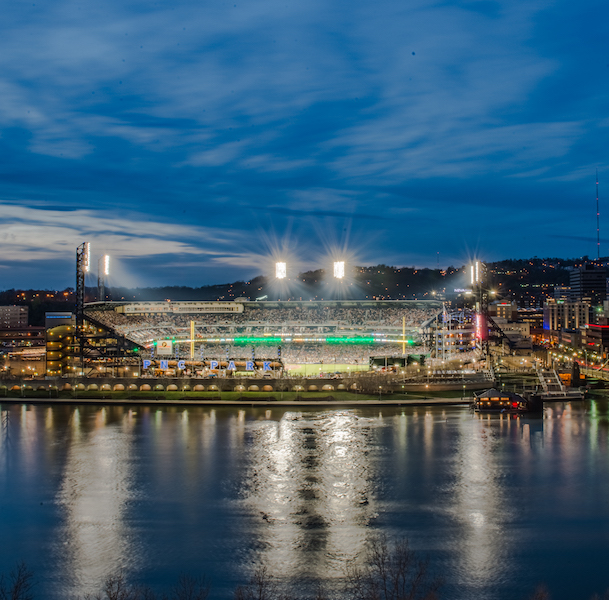 PNC Park is well recognized as one of the most beautiful ballparks in the world, and the Pittsburgh skyline has a lot to do with that.  The bowl of the ballpark opens onto the skyline, framing it and placing it in context as scenery behind the field.

When the park replace their field lighting with LEDs in 2017, the upgraded control system allowed for animated effects to be displayed on the huge arrays of light fixtures on the towers. Horatio was already slated to provide the monitoring for the system, so the integrator on the project asked us to use Horatio to integrate the video switcher control with the lighting system as well.  This allows the console operator to easily trigger animated effects during the game, like when the Pirates hit a home run or win the game.

Fifth Avenue Place, home to Highmark, is one of the tallest buildings in Pittsburgh, and is a prominent fixture in the view from PNC Park.  Around the same time that the ballpark installed their new system, Fifth Avenue Place was also redoing the lighting system and controls for their rooftop fixtures, and they included a Horatio to monitor their new system as well.

With both systems (PNC Park and Fifth Ave Place) connected to the Horatio cloud, we were able to route control signals from the video switcher at the ballpark, across the Allegheny River to the lighting controls at Fifth Avenue Place.  This lets us trigger effects on FAP’s roof using the same button press that triggers the field lighting effects.

Lighting Up the Skyline

While the logistics of taking an arbitrary video switcher control input and routing it to both the local field lighting and other remote controls is somewhat complex, it is entirely transparent to the operator.  They simply press a button labeled “Field Lighting Win,” and celebrations occur both in the ballpark and across the city.

The exciting thing is that this connection is inherently scalable.  The control signal to Fifth Ave Place could be expanded to route the signal to any number of Horatio or Miranda systems on buildings throughout Pittsburgh, allowing the entire city to celebrate a Pirates win simultaneously.