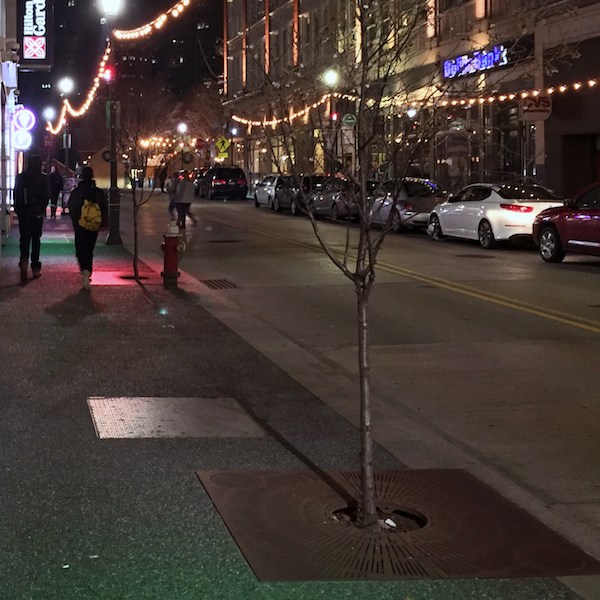 In 2017, we were contacted by The Plant Lady, a Pittsburgh-based company that provides indoor plant and holiday decoration services. They were working on a project that involved hanging holiday string lights along both sides of one block of Forbes Avenue in downtown Pittsburgh. The client, who owned the buildings along one side of that block, had also requested a sidewalk activation to go along with the string lights.

This was a very simple project, but the Miranda DMX was the perfect controller for the job. The string lights had a static look, so they could be tied directly into the street lights’ photo cells, but the sidewalk activation needed the ability to run cues continuously. We settled on a solution that packaged a 35W power supply, a Miranda DMX and six Gantom DMX Spots in a waterproof enclosure. We then built 9 of these packaged units, which were ziptied to the light posts along Forbes Avenue, and were also triggered by the street lights’ photocells. Every evening when it got dark, the sidewalk lights turned on and ran a continuous red, green and white loop until the sun came up the next morning.

Miranda’s ability to be deployed in a very small, unconditioned enclosure, which was then ziptied to a lamp post, is not something available in other controllers. Using Miranda made the system simpler, cheaper, and easier to install than many other solutions would have been.