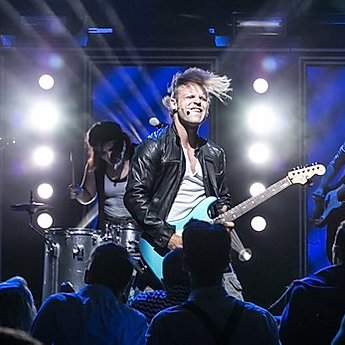 For the Record Live: The Brat Pack opened on the Norwegian Escape in 2016 and underwent small updates each year for the next three years of its run. Lighting Designer Michael Berger used an MSC Box to simplify his process and reduce friction in what needed to be a quick and easy tech process.

The way show control was set up on The Brat Pack, the light board sent MSC commands to Qlab, triggering scene changes and sound FX. In rehearsal, when Berger was jumping around through the cue stack, he would often inadvertently send commands to the sound playback machine. Since the lighting console they were using didn’t have a way to deactivate MIDI commands, he had to unplug the MIDI cable – but then he then had to remember to plug it back in when he was done.

After 2 years of repeatedly unplugging and re-plugging MIDI cables, Berger took an MSC Box with him for the show’s final update. The MSC Box gave him a way to easily interrupt the MIDI stream in a much more tactile way. The display gave him quick visual feedback as to whether the MIDI was active or not, and it cut down on confusion in the tech process. The MSC Box saved Berger a lot of time unplugging and re-plugging cables, and he now has it in his toolkit to use in tech for future productions.